Three Simple Things Trees Can Teach You About Making Big Changes to Your Life!

a message from Cheryl Richardson
Monday, 23 September, 2013
83 views, no comments - login or register to comment

As I walked around the yard admiring the tall maples, white pines, and Norway spruce, I realized I wouldn’t live to see most of them full grown. They would exist long after I was gone and someone else would enjoy the beauty of their maturing years. It was a poignant moment that put me in touch with mortality in a way I’d never experienced before. It also gave me an appreciation for what we leave behind.

A legacy of trees for people, birds, and insects to enjoy felt good to my soul. As the trees have taken hold, it’s become necessary to prune them every year to support their growth. When we scheduled a date, I told Jim I wanted join him because I was interested in learning about the process.  We started with a small magnolia tree in the front yard… 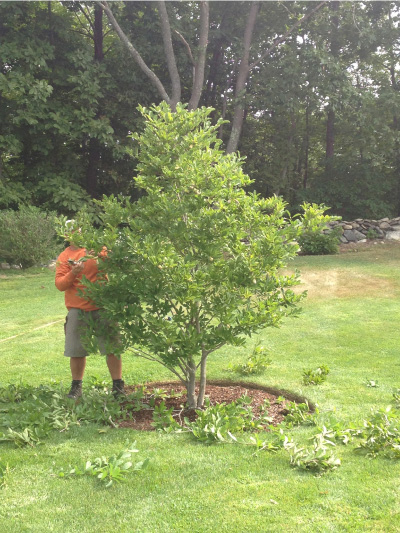 Jim explained that to support the growth and health of a tree, there were three stages to pruning. First, he would cut out any dead branches.  Then, he would focus on the interior of the tree and remove any cross branches - branches that were alive but growing sideways, because they interfered with the growth of the stronger, well-directed ones. This would also allow the tree to flourish by opening it to more light.

Finally, he would carefully remove branches that would improve the look of the tree. This is where the idea of "less is more," comes in. Jim explained that he would only be removing a few branches, one at a time, to be sure he preserved the most natural look. I like the way he thinks.

As I listened to Jim explain his work, I felt like he was giving voice to what was happening in my life. I was engaged in my own pruning process to reach the next level of growth and maturity myself. I was gently letting go of relationships that had gone by. I was getting rid of things around the house we no longer used, to lighten the load and make some welcome space. And I was releasing a few projects that were no longer aligned with my priorities.This part of the pruning process, releasing the dead branches, was a bit easier because I had a good sense of what had to go. It was the next stage that proved challenging.

When Jim talked about removing the branches that were alive but growing into the sturdier, well-directed ones, I saw this as the stage where I've been forced to confront my limits. The truth is we only have a finite amount of time available here on earth and it becomes far more valuable as we get older. Since I've wanted to put more energy into my art and into the people I consider my soul family, I needed to stop spreading myself too thin. This part is hard. I knew I might hurt people I cared about, but I had no desire to feign honesty. I wasn't willing to make promises - schedule phone calls to catch up or make dinner plans, only to have to cancel. I needed to tell the truth.

I also did a deeper pruning of things - items that held special meaning but no longer fit the space I want in my life. And I had to be brave enough to surrender a few creative projects I really wanted to do because I'm more enamored with going deep and wide than skimming the surface of my creativity.

I'm sure you have your own version of pruning. Maybe you've decided to stop putting your energy into friends who keep complaining but never do anything about their misery. Maybe you've canceled big plans to make the time to go back to school. Or, maybe you've been brave enough to sell your family home in service of a stress-free, less expensive lifestyle. 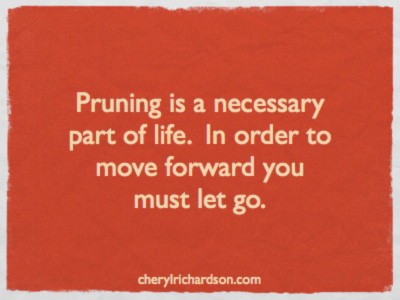 Finally, the last stage of pruning, to me, has been about the look, or maybe the feel of my body. While I haven't cut my hair or dyed it blonde, I did make a promise to myself, in the spring, to shed some unwanted weight by moving every day. I wasn't feeling like my true self and I want to live peacefully in my body for the remainder of my time here on the planet. This single act of pruning has had the most powerful impact of all.  Walking, jogging, hiking, and biking have left me feeling strong, more alive, and happy about what I see when I look in the mirror.  One kept promise goes a long way.

If you want to flourish and reach your full potential, you may need to do a little pruning of your own. Will it feel scary? Yup. Do you risk hurting people? Absolutely. Is it going to be hard sometimes? You betcha. But consider this: What's the alternative?

A limited, soulless life doesn't serve anyone.  Least of all - YOU!

This week, identify three things that need to be pruned from your life: a dead branch, a cross branch, and a gentle shedding of something that will help you like what you see. Then, get out the pruning shears and begin... This week's video is a beautiful advertisement about giving.

You can watch it here. Thanks, Farrukh!

This message was originally posted here

Cheryl Richardson is the author of The New York Times bestselling books, Take Time for Your Life, Life Makeovers, Stand Up for Your Life, The Unmistakable Touch of Grace and her new book The Art of Extreme Self Care. She was the first president of the International Coach Federation and holds one of their first Master Certified Coach credentials.

END_OF_DOCUMENT_TOKEN_TO_BE_REPLACED

Stand Up for Your Life
Cheryl Richardson